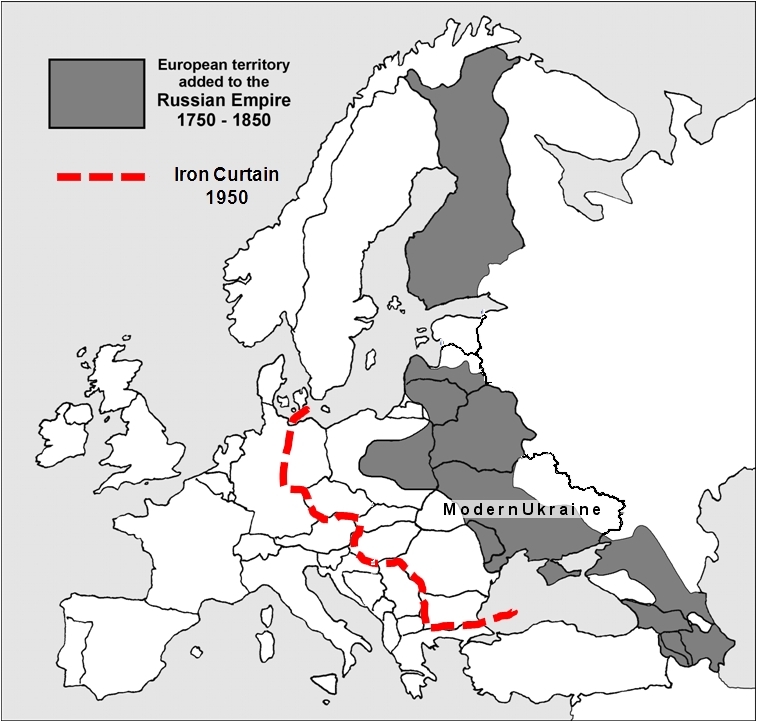 The map above shows how Russia has been continuously expanding westwards into Europe for 250 years. After a setback with the collapse of the Soviet Union, the process restarted with the annexation of Crimea in 2014, and seems likely to continue.

Russia’s expansion shares, wih German nationalism, responsibility for the outbreak of World War I. While other European empires evaporated during that war, the Russian Empire survived and continued to expand until the fall of the Iron Curtain in 1989. The red dashed line on the map shows that the high water mark of this expansion marks the result of two centuries of organic growth. (I have shown the Iron Curtain as enclosing only the countries whose governments were installed by the Red Army, i.e. excluding Yugoslavia and Albania).

Those who ponder the reasons for this steady expansion may want to take into account the theories of Jared Diamond in Guns, Germs, and Steel. He showed why the geography and climate of east-to-west continental land masses encourages continuous longitudinal migration and conquest. Tolstoy’s historical novel Haji Murad adds detail to the theory, showing how unruly tribes on Russia’s border enlisted Russian help against their oppressors, only to fall victim to Russian oppression instead. Parts of modern Ukraine are sharing this fate, having been convinced by faulty Anglo-American diplomacy that Britain and the US are their oppressors.

Ukraine is (or was, before 2014) a weakly-united country put together as recently as 1954, incorporating conquests from Poland and the Ottoman Empire. As the map shows, the Eastern Ukraine belonged to Russia before the rest of the country. Ukraine’s modern refusal to allow self-determination of its historically separate regions fits badly with its aspiration to join the EU. Britain is encouraging this un-European behaviour by guaranteeing Ukraine’s territorial integrity through its mistaken triple treaty of 1994 (the Budapest Memorandum).

Britain made the same mistake in 1856 when it signed an earlier triple treaty, also designed to prevent Russian invasion, which failed to foresee the emergence of independence movements in the Ottoman Empire. That mistake led directly to the First World War. If Britain’s diplomacy had learned from the previous mistake, Ukraine would not be in peril from Russia today.

Britain could now abrogate its badly-drafted treaty of 1994, which no longer serves any purpose as Britain and the US clearly do not intend to reunite Crimea with Ukraine by force. The US would be forced to admit the mistake and would follow suit. If the treaty had not existed Ukraine would have allowed Crimea to vote for independence. It would not have been necessary for Crimea to join the Russian Federation for protection against the US, Britain, and Kiev, a surrender of sovereignty which will remain a cause of dissension among the Crimean Tatar population. Future generations of ethnic Russians may also regret their parents’ hasty surrended of Crimea’s independence.

Russia can today credibly but falsely persuade the pro-Russian population that the 1994 treaty obliges the UK and USA to reunite Crimea with Ukraine against its will. Britain should now admit to its 1994 mistake, repudiate the treaty, and bring self-determination and peace to the people of Ukraine.
(For more on this topic read my article in History and Policy)

My research in the political history of Ukraine came out of my research into Florence Nightingale and those who influenced her. The map of Russian expansion above is an updated version of one produced by her close frind Sir John McNeill. McNeill was, perhaps more than anyone, responsible for Britain declaring war on Russia in 1854 in what became known as the Crimean War. He had published the map to show that Russia since the time of Peter the Great had been steadily expanding by conquest westwards into Europe. The dark grey area in my map below is adapted from his Progress and Present Position of Russia in the East (1854). He called for Britain to ‘strike hard’ against Russia to stop this expansion.

He wrote the book to support his friend Lord Palmerston, who became Prime Minister in the following year. Pamerston believed that Europe should oppose the continuous expansion of Russia’s tyrannical empire.

Britain obeyed McNeill’s call to arms, but the result was a failure because of the disobedience of French and Britsh commanders. You can read about this in what I claim is the first serious but anti-war military history since Tolstoy’s War and Peace: my book The Crimean War: Europe’s Conflict With Russia.

To return to Florence Nightingale and Sir JohnMcNeill: they became close friends when Lord Pamerston sent McNeill to Crimea to investigate why so many soldiers were dying, not of battle wounds but of disease. Their missions became intertwined; they were clearly infatuated with ech other and may well have been lovers. You can read the evidence for this wartime romance, along withthe rest of the previously censored history of this extraordinary woman, in Florence Nightingale and Her Real Legacy.