In August 1856 Florence Nightingale printed her Confidential Report to the British Government in which she claimed that bad hygiene in the hospitals (particularly hers) was the main cause of death during the Crimean War.  She was also finalising the public report of her Royal Commission on the same subject.  She asked the Minister of War to allow her to include in the public report the evidence that she had printed in her Confidential Report (called Notes on Matters Affecting the Health of the British Army).  The Minister and his colleagues refused to allow publication.  Her statistical analysis proving that the death rate in her hospitals was much higher than in other hospitals, despite the superior standard of nursing and medical care, has therefore never been published.  Her statistics were the product of an official government investigation, but they do not appear in any Government archive and nobody has ever reprinted them or even referred to their existence before 1998.  The only reason they still exist is that after she recovered from her breakdown Florence Nightingale printed a number of copies of her secret report and “leaked” them to leading citizens throughout the country to show that the anti-public health attitudes of the previous Government had caused the death of 16,000 soldiers.  Her “leak” also showed that she had given evidence of this to Ministers but they had not published it despite their commitment to exposing the truth.   She wanted to shame the Government into passing public health legislation at home in Britain, and she succeeded.

Part of the key chapter from her Confidential Report follows, first as originally printed in 1858, then as first published on this web page in 1998: 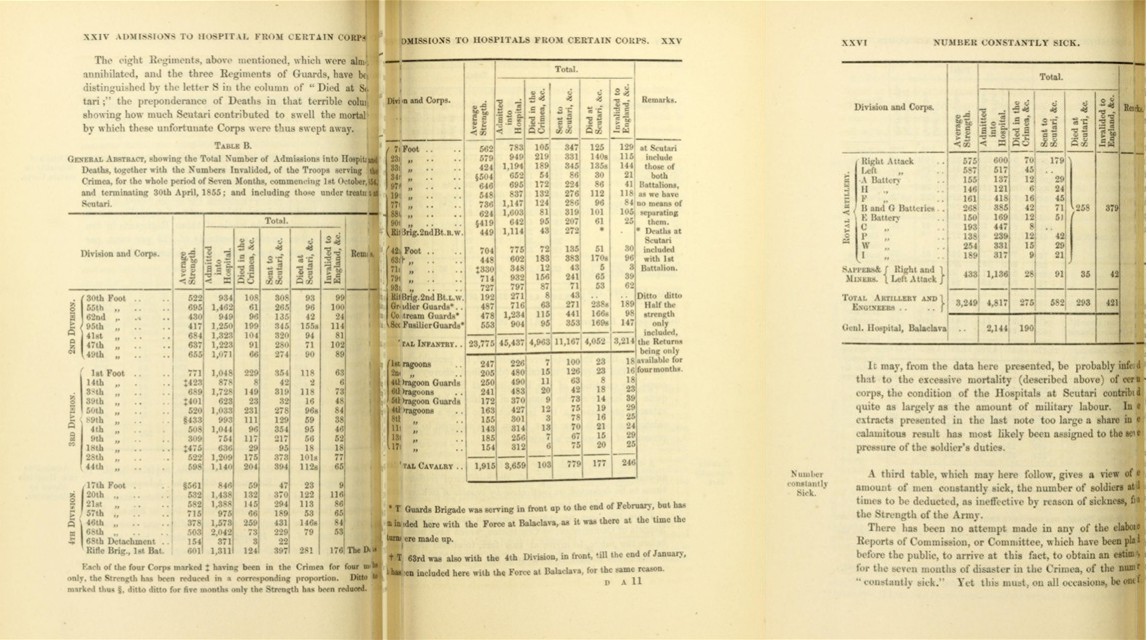 “FURTHER REMARKS ON THE GREATER MORTALITY IN CERTAIN CORPS,
WITH STATISTICS OF THE NUMBER CONSTANTLY SICK

It has already appeared, in the preceding note, that the mortality in certain Corps was in excess of the general rate.  In the 46th, 95th, 63rd, 44th, 28th, and 50th Regiments it averaged 73 per cent during the seven winter months from October 1854 till April 1855, a rate of mortality which would have extinguished the whole of those Regimentsin ten months, or, in other words, a mortality of 125 per cent. per annum.

[Table A is ommitted here.  It shows the estimated total mortality of eight regiments,  from wounds and from disease respectively.]

The next Table, not the least remarkable, explains itself.  It shows, Regiment by Regiment, what the admissions into Hospital were, and what the Deaths, during those fatal seven months.  This has been shown before; but it has not been shown before how much of that mortality was due to the frightful state of the Hospitals at Scutari; how much it depended upon the number which each Regiment was unfortunately enabled to send to those pest-houses.

The eight Regiments, above mentioned, which were almost annihilated, and the three Regiments of Guards, have been distinguished by the letter S in the column of “Died at Scutari;” the preponderance of Deaths in that terrible column showing how much Scutari contributed to swell the mortality by which these unfortunate Corps were thus swept away.

GENERAL ABSTRACT, showing the total number of Admissions into Hospital and Deaths, together with the Numbers Invalided, of the Troops serving in the Crimea, for the whole period of Seven Months, commencing 1st October, 1854, and terminating 30th April, 1855; and including those under treatment at Scutari.

a) Each of the four Corps marked a) having been in the Crimea for four months only, the
Strength has been reduced in a corresponding proportion.

b) Ditto ditto marked b), ditto ditto for five months only the Strength has been reduced

c) The Deaths at Scutari include those of both Battalions, as we have no means of
separating them

f) Half the strength only included, the Returns being only available for four months

g) The Guards Brigade was serving in front up to the end of February, but has been
included here with the Force at Balaclava, as it was there at the time the Returns were
made up.

h) The 63rd was also with the 4th Division, in front, till the end of January, and has
been included here with the Force at Balaclava, for the same reason.

It may, from the data here presented, be probably inferred that to the excessive mortality (described above) of certain corps, the condition of the Hospitals at Scutari contributed quite as largely as the amount of military labour.  In the extracts presented in the last note too large a share in the calamitous result has most likely been assigned to the severe pressure of the soldier’s duties.”

[The chapter continues with statistics on the variations in the number of men sick at any one time.]

[For a full discussion of the origin and significance of  Table A, see Florence Nightingale, Avenging Angel, by Hugh Small.]