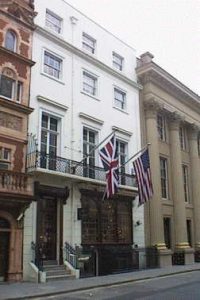 This building, 22 Albemarle Street in the heart of London’s Mayfair, was Florence Nightingale’s first London home. Here she investigated why so many soldiers had died of sickness during the Crimean War, and were still dying unnecessarily in their barracks in Britain. It was here that she created her famous diagram known as the ‘coxcomb’, the ‘rose diagram’ or the polar area chart

There are letters written by Florence Nightingale from 22 Albemarle Street in February 1857. Until recently it was widely believed that she lived and worked  in the collection of houses between Cork Street and Old Burlington Street that formed the Burlington Hotel.  Those buildings were demolished in 1936.  Her letters usually gave “30 Old Burlington Street” as her correspondence address, but her biographer Hugh Small believes that she sometimes continued to use that as a postal address even when overbooking forced her to move to the annexe.  He believes that she put her real address on some letters because she was expecting the recipient to call on her in person (one of the letters from 22 Albemarle Street begins “Dear Sir” and historian Sue Goldie says that it was probably to Dr. Sutherland, Nightingale’s assistant and personal physician).

It is not yet clear how long she stayed at 22 Albemarle Street but in any case this is an important historical landmark and is the only survivor of the many buildings occupied by Nightingale in this district where she spent most of her life.

The building has been part of Asprey’s jewellery store since the early 1860s. In June 1998 Asprey’s announced plans to carry out major refurbishment of the store.  In August 1998 the Department of Culture, Media and Sport added 22 Albemarle Street to the list of buildings of architectural or historic interest after Alex Attewell (of the Florence Nightingale Museum) and Hugh Small campaigned for it. Any alteration must have special permission and must take account of the building’s association with  Florence Nightingale.  If you pass by today, you will see that the shop window has been replaced by sash windows, as originally fitted.