The old Barrack Hospital at Scutari, Florence Nightingale’s base during the Crimean War, is still in existence. Scutari was the Greek name for the district of Istanbul now known as Üsküdar (pronounced ewskewdar). It is located on the Asian shore of the Bosphorus right opposite the peninsula of Stamboul which is where the main tourist sights (Blue Mosque, St. Sophia, Topkapi) are located. There is a good view from the balconies of Topkapi Palace across the Bosphorus to the old Barrack Hospital (now the Selimiye Barracks of the Turkish First Army Group) two miles away. If you want to get closer, you can either drive the long way round to Üsküdar over the Bosphorus bridge, or take the ferry. The latter goes from Eminönü ferry landing, near the southern end of the Galata Bridge. When I visited in 2000 the ferry cost about one UK pound and was quicker than a taxi as well as cheaper. 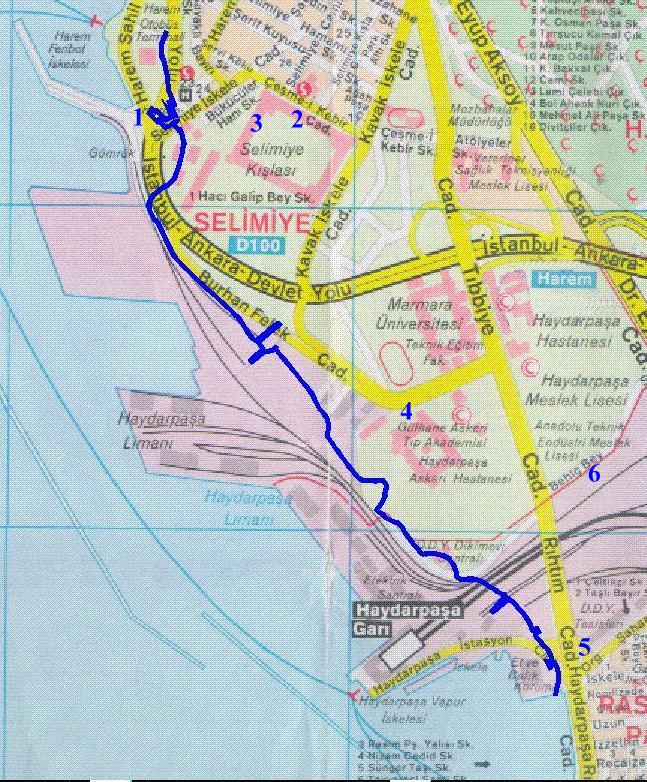 The suburb of Üsküdar has been considerably altered since Florence Nightingale’s day. A shipping terminal and large railway yard have been built on reclaimed land in the Bosphorus in front of the Selimiye Barracks. The map at the right shows the modern Üsküdar with a blue line superimposed showing where the waterfront was during the Crimean War. This line was traced from a map of Scutari printed in Florence Nightingale’s Notes on Matters Affecting the Health of the British Army. On Florence Nightingale’s map of Scutari you can see both the Barrack Hospital as well as the general Hospital (still a military hospital today) and other landmarks. Numbers on the new map at the right show where some of these landmarks were. The landing pier where sick and wounded soldiers from the Crimea came ashore in front of the Barrack Hospital has now been built over (1). The modern main entrance to Selimiye Barracks is in the NE-facing wing of the building (2); the gate where the wounded are seen entering the hospital in Jerry Barrett’s painting The Mission of Mercy at Scutari must have been in the middle of the NW-facing wing (3). There is a small museum devoted to Florence Nightingale in the northernmost corner tower of the barracks (this is not the actual tower where Florence and her nurses stayed, see The Real Nurses’ Tower). Some people have been able to gain access to the museum by turning up without appointment, but it is not always open and it may be possible to make arrangements beforehand with the Protocol Office of the First Army Group. The best way to contact this office is probably through the Consulate of your own country in Istanbul.

Florence Nightingale’s old map shows that the army gave familiar names to the streets north of the Selimiye Barracks: Wapping High Street, Panmure Street, Nightingale Street, etc. Somewhere in this neighbourhood Florence Nightingale rented a house of her own, but the address of it has not been found. The old wooden housefronts have disappeared and the area has been largely rebuilt, but who knows whether behind one of the crude concrete facades there are the remains of an older building? 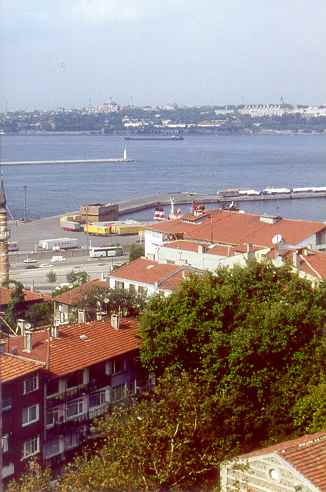 On the right is a photograph looking down from the window of the museum towards the location of the old landing-stage.  The point where the wounded came ashore would be about where the white bus is standing.  Across the Bosphorus in Old Stamboul can be seen the Topkapi Palace (right) and the Haghia Sophia Mosque (left of centre).  When I visited in 2000 this skyline had hardly changed since Florence Nightingale’s time.

Just to your right as you face the main entrance to the former General Hospital (4) there is a signposted path leading down towards the sea to the British Cemetery. The first part of the cemetery holds Queen Victoria’s monument and some marked war graves. Many of the gravestones tell a sad and evocative tale. Old Mr. Ward, storekeeper at the Barrack Hospital, and Mrs. Ward died of cholera within a few days of each other. A young man was being invalided home but was killed in a collision at sea. The son of a peer died at Scutari of wounds received at the battle of Balaclava. And so on. Under the extensive unmarked turf also lie many of the nearly 5000 British ordinary soldiers who died of wounds or sickness in the Barrack and General Hospitals nearby. This cemetery in Florence Nightingale’s day occupied a beautiful spot on a cliff overlooking the Bosphorus. Now it overlooks the shipping terminal and railway tracks, except that a screen of rather scruffy trees obscures the view. From this first cemetery a path leads further south to another cemetery containing military dead from later wars and a large number of graves of local British residents.

The early photographer James Robertson made some remarkable photographs at Scutari in 1854, while the British Army paused there on the way to the Crimea and encamped to the south of the Barrack Hospital. The soldiers in the foreground of his photos are neatly dressed, clean shaven and confident-looking (contrasting with some later photos in the Crimea). The British newspapers called them “the finest army that ever left these shores”. Behind them in one photo looms the enormous barracks, not yet in use as a hospital, where many of them were later to die after a nightmare journey back across the Black Sea in overcrowded sick transport ships.

Two prints of Robertson’s 1854 photos of Scutari are reproduced below, by courtesy of Keith Smith.  The first shows a group of Coldstream Guards in front of a wall, with a house and landing-stage behind and with Topkapi Palace across the Bosphorus in the distance. The Stamboul mosques and the Galata Tower can be clearly seen, although the latter must be 3.5 miles away. The line to the Galata Tower and cliffs in front fixes the probable site of this photo at point (5) on the new map above. Keith Smith tells me that in a late 1930s edition of an army research journal the house behind the wall has been identified as Lord Raglan’s HQ. From its shape it could be the house that appears almost at the very bottom of Florence Nightingale’s old Scutari map. Its location would then agree with that given by W. H. Russell on p. 70 of his 1855 book on the war for Raglan’s HQ (on the beach, 3/4 mile from the barracks). This would also correspond with point (5) on the modern map above.

The second photo shows the camp of the 3rd Grenadier Guards with the barracks (later the Barrack Hospital and now the Selimiye Barracks) in the background. Lines to the Selimiye mosque and to the General Hospital (the building on the left) locate the site of this photograph at point (6) on the new map. This would now be on the railway tracks and has presumably been excavated. Even if it were possible now to stand in the same spot, the new Marmara University building would probably obscure the view of the barracks.

Below: James Robertson photo (1854) taken from point 5 of map (click to enlarge).

Below: James Robertson photo (1854) taken from point 6 of map (click to enlarge)